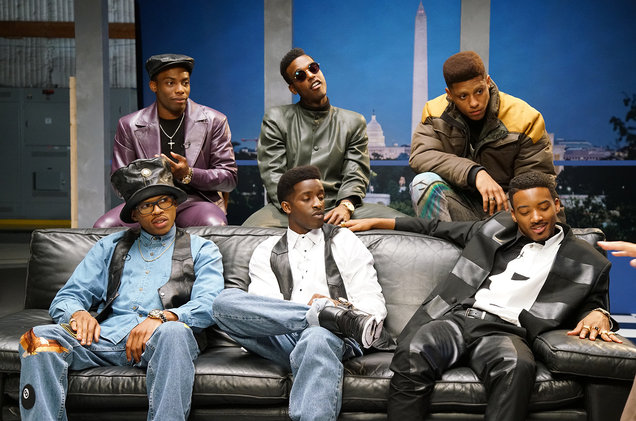 I’ve never been a huge New Edition fan. Mostly because of being born at a different time, and being more familiar with Bobby Brown’s personal life and Bell Biv Devoe’s “Poison.” When I heard that BET was doing a television biopic movie about them, I hate to admit now, but my hopes were pretty low. Most biopic music movies are terrible (see current trailer for Britney Spear’s Lifetime movie) and unauthorized, and I wasn’t sure I was willing to commit to six hours just for a good laugh.

After getting a text from a friend to watch it, I watched the repeat showing of Part 1 after the premiere and I was astounded. I had hope when I saw that Chris Robinson, a music video director who also directed the movie “ATL,” directed the mini series. The first part, the group is played by children actors, and their dancing, singing and acting was incredible. You actually saw that New Edition had been working day and night since they were kids who came for more than humble beginnings. The rest of the mini series was amazing, with it eventually concluding in 2005 when they performed at the 25th anniversary BET where they performed a melody of their hits.

The mini series was a rating success. It also helped increase New Edition’s Spotify streams up to 637 percent.

What notes can other music biopics take?

1. Have the people that the movie is about involved: All six members of New Edition were co-producers of the movie, and even were on set to teach the actors the dances. Having authorization of the people who the movie was about also meant you can get a more authentic storyline, including revealing things that people did not know (like the fact the Ricky had a drug problem).

2. Have the cast rerecord the songs with their voices, and actually be able to sing: What was so surprising and great about this is that the actors actually sang the songs. They all have really amazing voices, and sounded so much like New Edition.

3. Show full performances: To me what set this biopic apart from a lot of others is that they showed performances of entire songs. I think it helped that the director had experience shooting music videos, so it was well done. The performances with helped balance out all the drama and showed that despite it all, they were excellent artists.